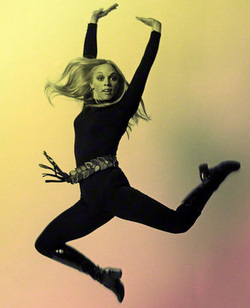 The queen of '70s Top Of The Pops, Flick Colby was the show's choreographer for over twelve years and is best remembered as the driving force behind Pan's People.

Felicity "Flick" Colby was born on 23rd March 1946 in Pennsylvania. A trained ballerina, she performed in several musicals before moving to Europe in the mid-1960s. Initially Flick took up residence in the Netherlands, where she became something of a star with her own TV special Felicity being nominated for a prize at the Munich Television Festival.

Having moved to London in 1966, Flick teamed up with friends Dee Dee Wilde and Babs Lord to form a dance troupe. Adopting the name Pan's People, they grew to a sextet with the addition of Ruth Pearson, Andi Rutherford and Louise Clark, taking on stage and television work across Europe. In 1968 they came to the attention of Top Of The Pops choreographer Virginia Mason, who began to use various group members on the show in preference to the outgoing dance troupe The Go-Jos.

By 1970 Pan's People had become TOTP's official dancers. With the pop video yet to be invented and promotional films still an occasional novelty, they were a regular fixture throughout the first half of the 1970s, appearing at least once a week; sometimes more, depending on the availability of the artists in that week's chart. For much of this time Flick was choreographing routines for Pan's People as well as performing them, until in 1971 she retired from dancing to become the troupe's full time choreographer. From a modern viewpoint, Flick's routines are often criticised for being too literal in their interpretation of song lyrics, her well-remembered adaptation of Gilbert O'Sullivan's Get Down  which involved the dancers scolding five actual dogs being perhaps the most notorious. Due to the fast moving nature of TOTP, however, Flick was frequently called upon to come up with a routine to a new hit song with only a few hours' notice when the routine the girls had been rehearsing unexpectedly dropped down the chart.
"They weren't Broadway-standard routines. We were definitely doing watercolours, not oil paintings." - Flick Colby
In addition to TOTP, Flick worked on other television shows, notably comedies such as The Goodies and The Two Ronnies. She also choreographed Catch My Soul, a rock musical produced by Jack Good, producer of the pioneering 1950s music TV show Oh Boy!

With Pan's People receiving more coverage on TOTP than any of the musicians who appeared on the show, they soon became household names. In 1974 the girls starred in their own TV special and even released a single. The following year they received the ultimate accolade of being asked to appear on the Morecambe & Wise Christmas Show. However, in May 1976 the group suddenly disappeared from TOTP to be replaced by a new dance troupe, Ruby Flipper.

Flick continued as TOTP's choreographer and worked with Ruby Flipper throughout their six month tenure on the show, as she did with their replacements Legs & Co and, in the early 1980s, Zoo. By this time though, the need for TOTP to employ a resident dance troupe had diminished thanks to the ubiquity of promotional videos. Leaving the show in 1983, Flick returned to her former home town of Clinton, New York where she married literature professor George Bahlke and opened a gift shop. Sadly Flick spent the last years of her life fighting breast cancer, a battle she finally lost on 26th May 2011. A generation of TV viewers will never forget her.